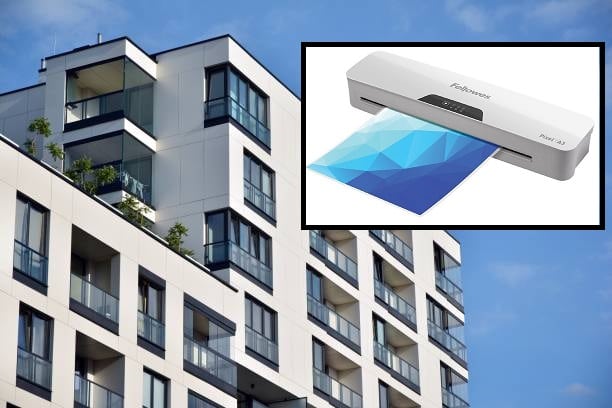 Residents in a West Perth strata complex have braced for impact after the meddling old cow from unit 6 was seen with a brand-spankin’ laminator which will undoubtedly be used to really step up her passive-aggressive note game.

We spoke to Taylor* in a nearby unit that didn’t want to give their full name under fear of complaint-related-reprisals from the self-styled strata sheriff. They told us,

“All this woman does is prowl the complex looking for things to complain about. Just last week I received a note asking me to consider the impact my noisy car was having on my neighbours by coming home past 10 o’clock each night. That’s when my shift ends, man”

Similarly, Tyson, who bravely did supply his real name had a run-in at the gym facility,

“On Sunday, I was in the gym with a mate and had my little portable speaker playing some tunes. Thought nothing of it at the time but when I returned on Monday there was a piece of paper stuck to the door saying parties with non-residents in the gym wouldn’t be tolerated and that I’d been reported. I just knew it was that cow. I ripped the note down and chucked it in the bin”

A source close to the meddling cow told us that seeing her handwritten note ripped up and thrown in the gym bin caused her to have a full-blown meltdown,

“Between you and me she couldn’t believe the audacity. This was pure insubordination and in her mind, if she doesn’t police the complex then who will? That’s when she decided to go nuclear. Word processing, lamination, and some heavy-duty tape. Shit is about to get serious”

Residents knew they were in trouble after the first laminated, intensely formatted note was left in the laundry. Clare who moved in recently told us,

“You could see the rage in the formatting. Underlines, capslock, red font to emphasise threats, and exclamation marks for days. This note was fierce and double laminated. It was saying that anyone leaving traces of washing powder on the top of the washing machine again will be dealt with severely at the next strata meeting”

It was obvious to Clare and everyone involved that playtime was over. It was the dawning of a new era of stratatership. Fall in line or get suffocated under her laminated authority.

We understand that at the time of interviewing the residents the meddling cow was working on her pièce de résistance – several laminated A3 sheets of paper detailing her 50 rules for using the pool.

That’s right baby, she’s got the A4 and the A3 laminator. Watch out.