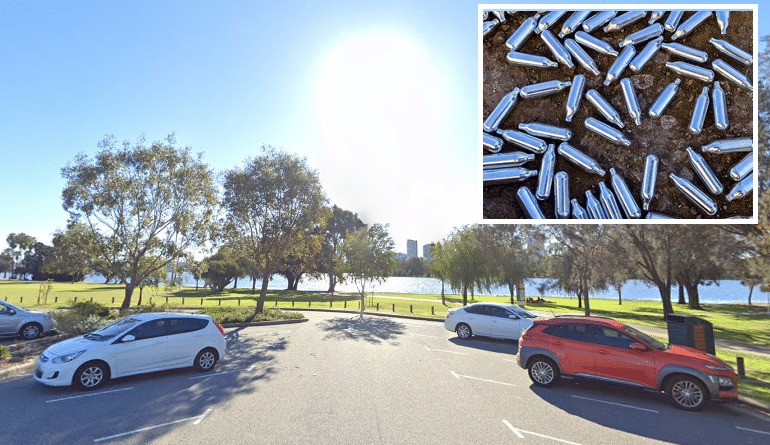 Jacques and Juliette moved to Perth 5 years ago and couldn’t believe the interest they saw in our younger generation when it came to the art of cake decorating. Tirelessly perfecting their craft by decorating cakes well into the morning each weekend.

Jacques met Juliette in Paris during their training to become pastry chefs. It’s rumoured that Jacques once made Juliette an éclair so buttery & exquisite that it made her cry. It was from that point they knew their mission in life was to spread the joy of baking.

So you can only imagine their shock when they stumbled across 150 discarded N20 canisters in the South Perth foreshore one Sunday morning. We spoke to Jacques,

“We were, how you say, amazed! There had to be enough cream charger canisters to decorate an entire cake store. We saw a lot of, as you say, ‘frangers’ too, so we could tell these youngsters got as excited about baking as us”

Juliette thought that this could’ve been a one-off, underground, street bake-off. Like she’d once seen in the rough streets of Grigny. She told The Bell Tower Times,

“We thought magnifique! These kids are doing some serious baking. So I came down to the same spot every weekend for a few months and it was always the same. They could learn some lessons in cleaning up after themselves but with this much practice their pastry must be parfait!”

And voila! At that very moment, the two pastry experts set out to establish the first late-night bakery academy in the foreshore car park with classes ranging from 2 am – 5 am depending on how seasoned the budding pastry chefs are.

We spoke to Dylan, a local youth who carries a cream charger & packet of party balloons in his P-plater chariot at all times. He expressed some interest in the academy,

“Hell good, finally someone respecting my craft. Late-night baking is all I do bro, I can’t really afford anything better, that’s what it’s like growing up in the poor side of Como. Can’t wait to meet up with like-minded people and really smash that cream charger”

Another youth, Trealyn, is a budding DJ and an absolute regular on the late-night foreshore baking circuit, he told us,

“$50, I seen on the flyer that all ‘ingredients’ are supplied, very cool man. I spend like… way more than that each night. Looking forward to decorating my cake if you know what I mean. The French are alright, ay”

Even if the organisers and the 100 indicated attendees aren’t exactly on the same page you can’t argue with the enthusiasm. There is an obvious interest in baking and Jacques & Juliette have boldly stepped in to fill that gap.

Who knows, one day we might see young Trealyn on Masterchef if he hasn’t restricted too much oxygen to his brain in that time.

Jacques & Juliette also have plans to expand the academy in a Wilson’s Car Park in the city and Kalamunda Zig Zag once night access is granted to the public once again.