Harold’s oversized, dawdling caravan is a perfect metaphor for his need to keep society from progressing. Whether it be the road to your first investment property or the road to Broome, you better believe Harold & Maude are creating an impasse of boomtacular proportions.

Now, just because he had over half a century to learn how to drive considerately, doesn’t mean he will.

It’s not that he can’t, it’s that he just doesn’t give a shit because so-called “speed limits” burn fuel and if you think George Double-ya acted like a tool to protect his oil reserves, then you haven’t seen anything yet.

Unless of course, testing that accelerator pedal on that $100k Land Cruiser means it will prevent you from passing when an overtaking lane becomes available. Then suddenly, he’s dominating that pedal with no regard for its safe word.

Not by paying $25 a night or any of that nonsense but by parking at a nearby beach and then making their way over to leave the communal ablutions blocks looking like a hurricane tore through a Yogo Dirt Dessert factory.

As a parting gift, Harold will use whatever means necessary to acquire any communal soap and toilet paper and then flee slowly into the day leaving behind 3 weeks worth of rubbish next to a bin for someone else to clean up.

After all, everyone needs to chip in to help them live like royalty in their golden years.

Despite what many think, the glamorous life of listening to your spouse serenade the caravan toilet with the song of curried snags isn’t all it’s cracked up to be.

So Harold & Maude love to stop off in country towns where they expect a red carpet greeting on a Red Dot budget.

In Harold’s mind, these towns are lucky he is choosing to blow some of his kid’s inheritances at their venues.

Yep, behold the economic boost of a $7 bowl of wedges, while they sit in the air-conditioning for 8 hours and post on Grey Nomad forums about how backpackers are road-parasites with no respect. Bit rich, mate.

After habitually swiping the pub’s tomato sauce bottle, Harold & Maude will descend upon the local tourism providers and demand a pensioner discount on any local tour.

If the tour operator caves in, they will get to hear about how Harold hasn’t bought toilet paper in 6 months and other red-hot tips on leaching from the fat of the road.

Of course, if Harold is ever called out on his behaviour he will conveniently forget about his 3 investment properties and cry poor.

Now, get the hell out of his way, he’s spotted an all you can eat buffet that he plans to liberate 10 Tupperware containers worth of chicken wings like they were trapped in a cave. 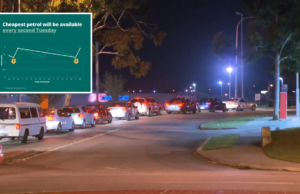