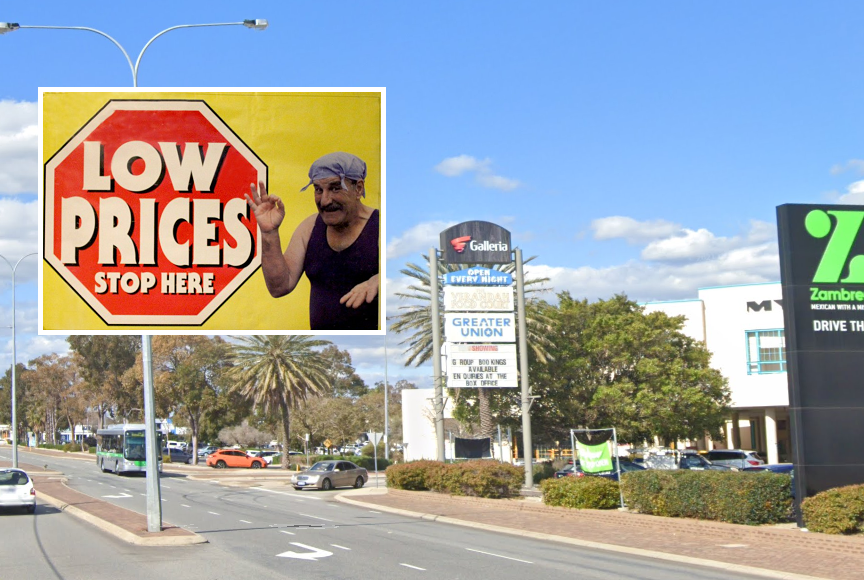 In response to concerns Morley is advancing at the cruel pace of progress, the Council has decided to grant an application to bring back WA Salvage to nip that progression right in the bud.

See, Morley ratepayers are alarmed at the increasing modernisation of their beloved suburb. Some fear that it will one day catch up with the rest of Perth circa 2006.

At the heart of these concerns was the sad demise of both the last remaining Blockbuster in the state and the Sizzler. Two retro institutions that gave Morley a real dated charm.

We spoke to Angela who had lived in Morley for 40 years. She told The Times,

“We can’t expect the Rollerdome, Leisure Island & Sanity to do all the heavy lifting here. Something has to fill the nostalgic void of Blockbuster & Sizzler and we all agree WA Salvage is the go”

“We were all pretty chuffed when Telsta made the payphones free again and we’d see a few more people using them. That reminded us of a bygone year but it’s not enough we need a place to sava da money!”

In addition to WA Salvage literally rising from the ashes there has been strong community interest in blocking any attempts at developing Galleria.

Sofia is staunchly anti-Galleria development and told The Times she fears their beloved relic of a shopping centre might be in for a facelift like Karrinyup. Adding,

“If even one youth’s graffiti mark is removed from the stairs there will be hell to pay! Why is the world is in such a hurry to erase the majesty of 1980s Perth? Didn’t we peak then?”

Other ideas to preserve Morley’s rustic reputation have been deemed too impractical. Including bringing back horse & carts to replace Uber, put lead back in the petrol and can Sunday trading hours.

A spokesperson for the Council told The Times, “ee are all for making sure Morley doesn’t look a day over 1999 but c’mon we have to have limits. Maybe we can get a Lone Star back where you can chuck peanuts at whoever you want. That was always fun right?”