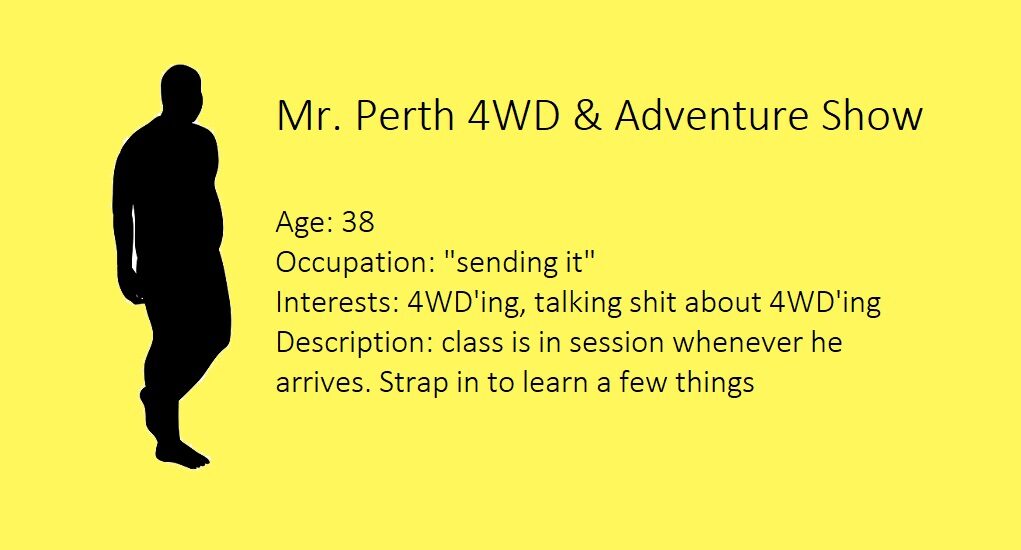 Let’s make one thing clear, Macka isn’t merely attending the Perth 4WD & Adventure Show in the capacity of some pleb. He’s bestowing his presence on it. He’s giving up his time to feed the knowledge starved masses an 8-course degustation of his steaming hot adventuring prowess. Get the picture?

Macka starts his day by pulling into the free parking on McCallum Park. Instantly, he puts on a free show for anyone in his vicinity with his signature move – letting out a thick plume of diesel soot.

Sure some kids cop the disgusting cloud to the face but at least their vision is slightly obscured. Saving them from reading some of his more “graphic” bumper stickers detailing his passion for the dirt track.

Predictably, there is tension at the gate when Macka is informed it’s $20 for entry and he has to sign in. Unfortunately for them, Macka is running low on the coolant of civility, and his piston pumping dickheadery explodes,

“I never check-in, orright? You mutts will just sell that to the cops I’m not stupid. Not paying $20 either, I’m farken royalty in this community. Check if I’m on the exhibitor list again”

After a tense 4 minutes of trying to stand over the gate staff, Macka finally accepts that his invite must have been lost in the mail. He proceeds into the show begrudgingly and makes his way around the exhibitor tents.

For the first 30 minutes, Macka is mostly getting in the faces of exhibitors and showing them terrible footage of him “sending it” in his Patrol. Maybe it’s the obvious drink driving, perhaps it’s the reckless endangerment of life but everyone forced to watch his videos looks like they’d just walked into a portaloo after Clive Palmer had exorcised the demons after a big night on the fish curry.

Luckily for a bloke exhibiting suspension products, Macka is distracted after he spots a 4WD content creator that he’d been harassing for several months over Instagram & Facebook. To prepare for the confrontation, Macka slams 2 Jack Daniel’s American Serves he’d smuggled in and commences the meth-waddle of an irate blowhard.

“Oi, why did you block me on Instagram ya muppet! Is it cos I kept making ya look silly? Anyone who knows anything knows you can’t 4WD for shit!!!”

Meeting Macka in real life was just as unpleasant as the content creator had expected. To date, Macka had sent the bloke over 400 abusive comments mostly about flex and recovery techniques. Perfectly rational things to get fired up about really.

Luckily, some perfectly timed divine intervention manifested itself and Macka is distracted by the ARB Recovery Demo starting. He’ll feed the prick a knuckle sandwich later, for now, the man giving the demo must be held to account – Macka account.

He slams 2 more JD’s and starts heckling the demo obnoxiously. Making sure to contradict the presenters with a level of incompetence you could only expect from a Channel 7 journo identifying a suspect.

Things quickly fall apart when Macka drunkenly stumps towards the strap to “make some adjustments”. It’s about all the show can handle of the man as he’s directed to leave before the police are called.

While no stranger to being evicted from family events, Macka is no less annoyed about it. As a parting present, he decided to rip up some grass in his fourby while screaming at the content creator to come and face him like a man.

Get some rest Macka. Lots of rest, the kind of rest where 7 Dwarves watch over you in concern.