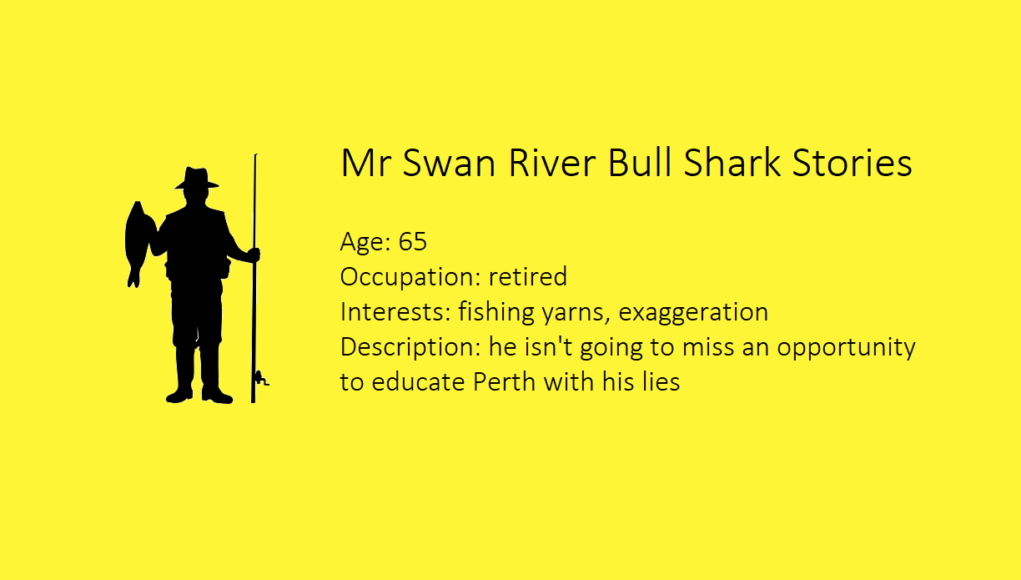 The estuaries of social media are thick with the burley of one-up-manship. It is this rich feeding ground that attracts Ken – a seasoned campaigner in the Swan River fishing game and a man who’s been exaggerating his sightings since before you were born, son.

See, Ken is from a school of river anglers that never had fandangled camera phones when they fished. Accordingly, not one person has ever held Ken to account over his stories while he’s 8 middies of Swanny D deep and talking semi-incoherently on his bar stool.

Nevertheless, it can’t be denied that Ken spends a lot of time on the water. His boomer taste buds favour riverfood marinara with a delicate blue-green algae sauce. So he’s out throwing lines most mornings.

Upon hearing of the events at Blackwall Reach, Ken decides to begin his masterclass with a little history lesson,

“I’m 65 and when I was in high school we had our swimming carnivals in the Swan (… imagine the snowflakes today! ha)… can’t remember a year where we didn’t have to clear out of the water due to a bull shark sighting… mind you, one year the McGriffin boys said nup we’re not getting out and we just shooed the 2.5m shark away, ended up with silver in backstroke”

More grains of salt than Captain Jack’s beard. His comment is inundated with similar recollections about the good old days. Perhaps there are a few corn kernels of truth to be found in the huge stinking logs being dropped but most are sceptical.

After leaving the same story on several other posts, Ken begins to get confused at what his aim is. He started in an educational role, quickly drifted into a “toughen up princess” mindset and now finds himself unable to stop causing further panic.

On an ABC article, he decides to put the uninitiated minds at ease by belting out an intense power ballad of exaggerated bull-fish,

“Oh please.. ha ha… I’ve been fishing & diving the Swan for 55 years. Last week, I was out chasing flatties (no not 3m why do people keep commenting that on my posts???) and lost my catch to a bully, hungry bugger snapped it up! I’d bet the last Bakewell pastie on it being a little longer than my tinnie, yep 3 to 3 and a half metres easy”

After a long day of whispering dishonest nothings, Ken decides it’s time to hit the front bar so he can talk to non-snowflakes who bloody know what’s what. 3 minutes into his great white shark in the Canning River story, his mate Jack hobbles in.

“Has Ken told you about the time he lost his rod when he saw a dolphin *booming laughing*, dropped it right into the river he did, the big girl’s blouse. He was yelling ‘SHARK, SHARK’, it was your shout that day”

Ken may have let the story slide but Jack went and said it in front of the new female bar staffer. This is a clear violation of the old mate code. He’ll try to get Jack booted from the fishing club later but for now, he has is careful not to come off as a snowflake.

So he continues his great white story and chucks a few feet on the fish to recover from the Jack attack. This is how the delicate ego-system of the Swan River fisherman is maintained.

Life was going pretty well for Brad. His brother’s recent visit to Hotel Hakea meant he was now the proud custodian of a WRX....