When Joel left Perth he was merely a drop in the obnoxious ocean, but visiting Berlin for a whole month had a catastrophic cunter-fly effect, and he returned as a mighty dickhead tsunami.

On his first day, he wasted no time taking a selfie at an art gallery in the bohemian suburb of Friedrichshain to show off his new look. How would one describe this look? Well…

He was sporting an “I’m offended” bowl-cut that appeared to be triggered by his despicable Freddy Moustache. Combined with early 90’s style FILA get-up that he got from Urban Outfitters he looked like a BBC presenter that had just finished 15 years and didn’t have an updated change of clothes on his release date.

He flooded his social media with updates about doing K, eating “the best kebabs in the world” and how the Perth art scene is just plain sad in comparison.

Upon his arrival, back in Perth, he caught up with his friends in Mount Lawley. They were kind of glad to see him until they realised on top of looking like a flog he turned into the Angelina Jolie of attention seekery and couldn’t stop adopting trends:

Gluten-free, vegan, black & white movie fan, you name it, he was into it. Basically, he threw himself off the pretentious tree and hit every branch on the way down.

Days turned to months, and Joel still hadn’t snapped out of it. Hanging out with him had turned into a painful exercise in enduring his non-stop Berlin fawning. He annoys his mate on a night out, “I’m like so over this, did I tell you about doing K at Berghain with those German silent artists?”

“Yes, repeatedly”. Joel continues, “I’m so unmotivated even to do my street art, I’m totally going to move to Berlin, they really get me ya’know?” His mate rolls his eyes, “then book a fucking ticket and do it”.

Of course, 30 days in a foreign city had rendered Joel too important, too cool to lower himself to the Perth workforce, so he digs deep and pulls out a stunt from the face-palm play-book: a GoFundMe to send him to Berlin to do art.

He manages to raise about $20 in a week. How could people not see his vision? This was a crime against art. To make matters worse, he just smoked his last Lucky Strike dart. Aw shit, a passive-aggressive hipsterlanche was coming.

He reposts a photo of himself posing like he was in a German techno band, “Keep an eye on the people who don’t clap when you are winning”.

Get a job mate. 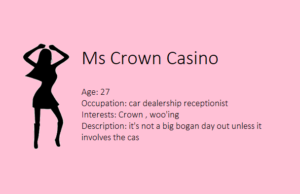 Chrissy is pacing around her Rockingham duplex while trying to figure out what to wear today. It’s her birthday and she has assembled her...