Double demerit periods are special times of the year where cash strapped relatives are united with their drongo Commodore driving kin to “take one for the team” and save the hoon from another spiel on the sideline.

Eldery and broke relatives alike, will get the chance to take a serious licensing hit in exchange for various levels of compensation.

One such touching moment happened just this morning when Jaxxon, a self professed “full time sik karnt” and alumni from the school of hard knocks agreed to return his nan’s TV if she took an 8 point hit for him.

We spoke to Jaxxon about the arrangement,

“Thought I was sweet to open her up on Abernethy but I wasn’t ay. When I saw the flash I knew I was farked but nan always told me to make lemonade when yas cop lemons”

We asked what that meant in this context,

“I instantly got on the phone to nan and told her a fantastic opportunity had come up for her to get her telly back that happens to be in my living room since March. Old duck doesn’t drive anyway so if the photo doesn’t clearly identify me then she takes the hit and can watch The Chase again, win, win. That’ll stop her whinging about it, ay”

Not every elderly relative is being taken advantage of however. Frank for Balcatta’s eyes lit up when he was informed his nephew got carried away trying to look cool driving through Leedy and ran a redder.

Although Frank is rumoured to have a bank’s worth of $100 notes buried under his lemon tree, he wasn’t going to let this opportunity slip.

“I make-a Dino an offer he cannot refuse! The boy, the dumb dumb boy, it’s his mother’s side, madonnn. He give me $500 in fresh hundred dollar bills and 2 days labour on-a my tomatoes! Then I take his hit”

Dino was indeed unable to refuse the deal. Not only because the terms were favourable but because he was admittedly one step away from being booted for the family for skipping the sauce bottling day earlier in the year. A big no no.

Elderly relatives are being advised to watch out for grifters on Gumtree offering to undercut the market with their desperate prices.

At the end of the day, who would you rather have sign a fraudulent declaration? Some chump off Gumtree who will sell you out the moment the heat gets turned on them? Or nan who will do it with a nice plate of bickies? 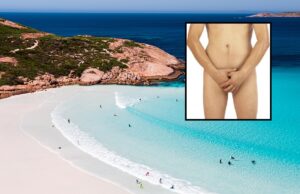