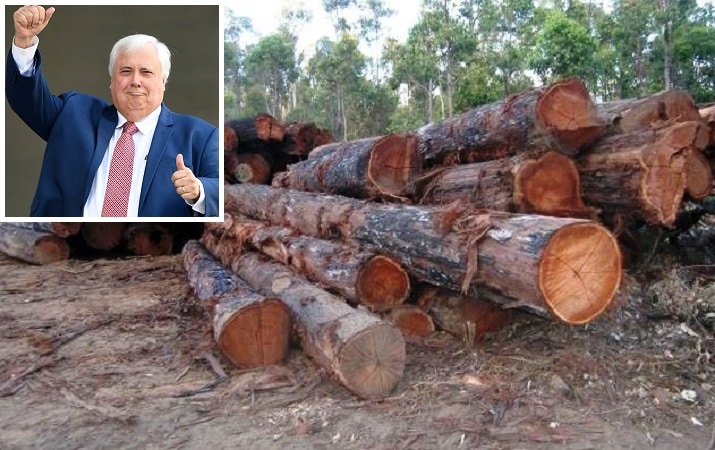 Sources from within the Palmer camp say the rotund litigation pest was livid that WA dared to create policy without first checking with him.

In a move that should see his lawyers add another storey to their Gold Coast holiday homes, the king of costs orders has instructed them to file an action questioning the constitutional validity of the conservation of native forests.

It is understood that the action will seek to rule WA’s act of “greeny garbage” unconstitutional but also guarantee specific protection to any mining company Palmer has an interest in to clear as many trees as he likes. Wherever they may grow.

There are rumours that after a party pie binge Palmer entered a fugue state and kept repeating “why do ALCOA get all the fun” while the build-up of spittle and tomato sauce formed a mighty foam.

Sources state that this “definitely” isn’t related to Palmer’s hissy fit after being denied entry into the state last year. Instead, insisting it was because Palmer believes the science of “trees” isn’t settled.

“Clive has never really bought into deforestation. He reckons there’s no proof they produce oxygen and anyway, he buys tanks of the stuff to recover from the living hell of walking up small flights of stairs around his resorts. So in his view, are trees even necessary?”

Of course, Clive denies any motivation of kookery or self-interest saying,

“It’s the right of every Australian mining magnate to fell as much native growth forest as they can for a strong bottom line. Has that clown McGowan even thought about the employees who will lose their jobs? It’s an outrage”

It was certainly surprising to hear that the big man was so concerned with a worker’s ability to pay their bills. Clearly a view he takes when he isn’t the entity charged with paying said workers.

To prove his point, Clive has allegedly reached out to paper manufacturers and requested the paper for his next unsolicited “trees are a hoax” letter drop campaign MUST come from the wood of the oldest native trees.

“WA Citizens expect that the insane propaganda they receive in their letterboxes is made from the best wood WA has. Not this softwood, Greta Thunberg, save the world crap”

Furthermore, unconfirmed reports allege Clive is teaming up with Craig Kelly to invest in “activated oxygen” which in their view is PROVEN to cure symptoms of suffocation. It will retail for $50 a container. 30% off if purchased with a year’s supply of hydroxychloroquine.