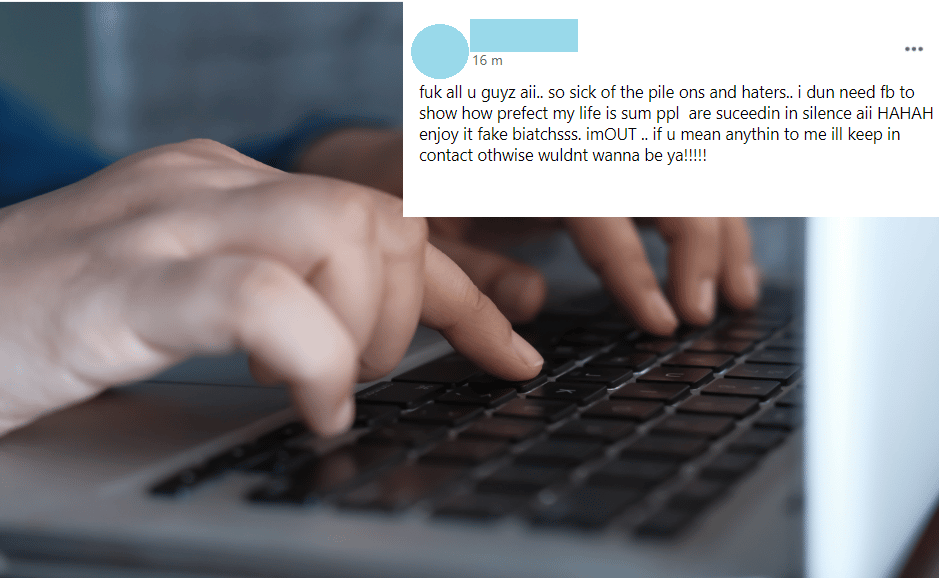 Close contacts & Facebook acquaintances were left to pick up the pieces yesterday when Tamara, a local drama-seeking land dugong announced she was quitting social media for the 3rd time this year.

It is believed Tamara threw her toys out of the cot on this occasion after being slaughtered on her own timeline after trying to shame a small business after they refused to give her a full refund plus $30 worth of extra food.

“Yeah look, I would’ve deleted her ages ago but tbh seeing her constant self-inflicted life failures makes me feel better about myself. She was claiming a local Chinese joint made her wait 30 minutes for delivery and then forgot her extra serving of sweet & sour sauce. Her claims were unreasonable and she shared the review to every group she was on”

After several hours of being called an entitled Karen, Tamara detonated the IED of narcissism and announced that she was “done” with “all the fake biatches” and “bakstabbers”.

We have managed to secure a screenshot of the message that everyone can agree is pretty rich coming from someone who tried to destroy a family-run business.

We understand she waited until she had farmed enough faux-concern from her FB contacts before going nuclear and deactivating her account. She was seen ignoring all offers to “dm” friends and giving vague responses about “loyalty” and people how she didn’t need “haterz” in her life.

Tamara’s sister in law told us,

“Yeah, we are all in shock. Tamz has a history of this but no one thought she’d go through with another threat to quit facey. To be honest, sitting on Facebook is all she does. Last time this happened she was back within the hour”

Tamara truly left a hole in the social network. Where were her friends going to get misinformation about vaccines? Or read racist remarks on 7 news articles? It was a tough time.

You can only imagine the shock & surprise her contacts felt when Tamara reactivated her account the next day. Posting her favourite meme of Marilyn Monroe’s quote superimposed over a photo of a sassy Minion.

Absolutely unbelievable scenes. Who would’ve thought Tamara was insincere about her plans to quit Facebook (for the 3rd time) and was doing it all for a bit of drama.

However, in truly shocking scenes, we understand that Tamara actually didn’t quit at all. Running several alt accounts to monitor what people were saying about her in FB groups while she was gone.

All we can say is Tamara is coming with the receipts and anyone who thought they were safe to talk shit about her is in for some very uncomfortable DMs.