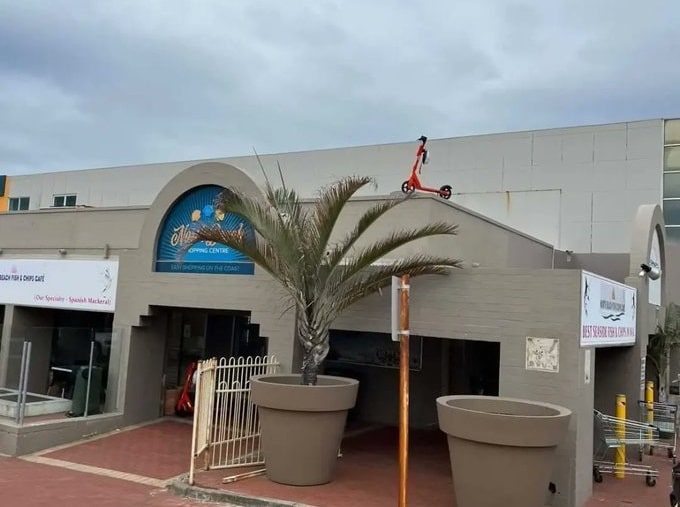 The City of Stirling introduced a 12 month trial of rentable eScooters and it’s fair to say many of the affluent residents of the North West coastal burbs are blowing a collective head gasket over them.

Community Facebook groups have been burning hot with accounts of everyday citizens who have been forced to coexist with the “orange scourge” for several months. For many, it’s a cross too heavy to bear.

The issue came to a head the other day when a suspected smartarse youth managed to get a couple of eScooters on top of buildings in North Beach. It was seen as a full-blown declaration of war.

We understand that military intervention was requested on Monday night. Alas, the best the local Ranger could do was agree to step up the patrols and make sure shit head kids weren’t doing ghosties down the stairways to the beach.

We tracked down a boomer who was seeking permission from the local constabulary to enact citizens arrests on people whom he believes are behaving inappropriately on eScooters. He told The Times,

“Kids just zoom past when I’m on my daily walk. What gives them the right to pass me so sneakily? I can barely hear them. I was told chucking rocks in their way would lead to possible charges against me so now I am hoping I’ll be permitted to detain the little scrotes”

Similarly, a local admin of a beachside community FB page is having an absolute ‘mare. Unable to deal with witnesses “packs of youths” roll through the suburb with clear intentions of getting up to no good. She told The Times,

“I see mullets, bumbags, and Nike sports shoes! In North Beach!!! Clearly, we need an inquiry into the range of these scooters. How are they getting here from Girrawheen or whatever suburb where *that* kinda thing is acceptable?”

She went on to say that the dumping of the rentable e-cockroaches was the single biggest issue affecting her community. Saying that she’s even happy to share her story with the people of Ukraine to give them some perspective on their own troubles.

Launching into a 10:30 am, Savvy B fuelled rant, she told The Times,

“I don’t pay my rates to be forced to look at scooters discarded on the footpath! How long until these scooter gangs escalate their activities? I don’t want my child getting caught up in a drive-by on his walk home!!!!”

Yes, it seems the northern beach belt is desperate to avoid the fate of Cottesloe. Which is just waiting to be overrun by youth gangs after approval was finally given to build the skatepark. It’s only a matter of time.