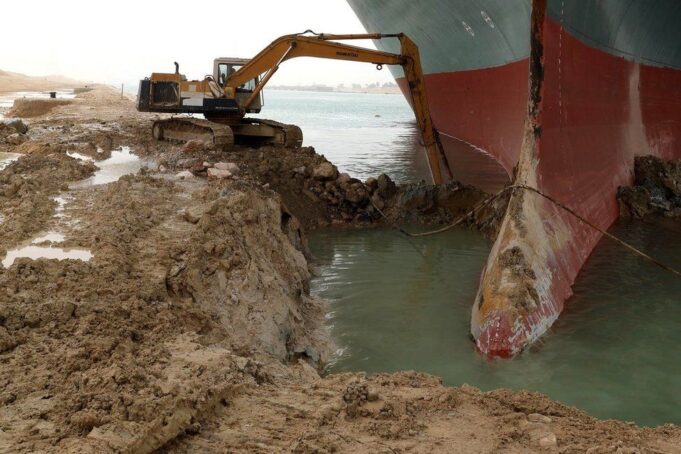 In the filthy Suez of life, some turds block the system. It’s then the job of highly trained experts to roll up their sleeves and reach deep into the unknowns of crisis management to flush this problem away.

Unfortunately, most of these experts are stuck in Perth, Australia, only being able to offer assistance via their keyboards. Let’s meet the panel.

Macca, 35, provides specialist commentary on excavators. He drives a forklift daily and once had a go on his mate’s Bobcat skid steer in Quindanning for 25 minutes. He tells people it was a big excavator which was a “piece of piss” to operate seeing as he operated the real deal “up on the moines” at a job he claims to have held between 2009 – 2010.

Macca is highly critical of the current excavator operator’s technique after viewing a still image, “yeah, nah look at that muppet, he not diggin’ right, ayy”. According to Macca if he was in the seat he’d “have that big cunnova thing floating” in “half a day tops, including smoko”. His estimates are based on the “million tonnes of ore” he’s claimed to have moved at Cloudbreak.

Thommo, 44, is the go-to man on watercraft in perilous situations. Having obtained the lofty status of a skipper ticket holder, Thommo has crashed everything from dinghies to runabouts in the Mandurah canals. Having recently been responsible for his mate’s boat coming off on Rockingham Rd he knows a thing or two about recovery under pressure.

Thommo is spewin’, mate. How has not one of those “leftard uni educated clipboards” not thought to just bung a 3 point turn and sail her out of that canal? It’s painfully simple, just “dump some of that shit off”, wait for high tide and then “give ‘er some”. He hypothesise that provided the captain can avoid having “shitforbrains” his delivery of Vape Juice should be back on track by Sat’dee.

Kristee, 50, provides expert opinions on freight management. She has held multiple warehouse admin roles and currently oversees a fleet of 2 delivery trucks that deliver payloads all across the metro area. She is currently being sued by 3 companies for non-delivery of goods.

Kristee maintains there is no significant difference between a blockage in the Suez Canal and dealing with another one of her drivers when they smash into the Bayswater Bridge. Having briefly sighted Google Maps, kristee believes there “shouldn’t be no disruption of trade, so many roots u dont need to use justs one little river, but u carnt trust those eygptions! Lazy!!”

Jack, 28, provides incoherent rants on conspiracy theories. He’s drunk more Kool-Aid than a diabetic American and sorely needs to lay off the pipe. He didn’t even need to inform himself of the facts of this disaster before diving balls-deep into theories that are nuttier than a squirrel’s shart.

“WAKE UP HAH GOOD LITTLE SLAVEES EATING UP THE NARRATIVE LOL QUESTION IT MAYBE? EVERGREEN… HILLARY CLINTON’S SECRET SERVICE NAME!? MILLIONS OF SHIPS A DAY AND **THIS** ONE GETS STUCK… JUST HOPE SOMEONE GETS ALL OF CLINTON’S HUMANTRAFFICKIN VICTIMS OFF BEFORE SHE GETS TO THEM”.

Certainly some food for thought but the real question is does the international crisis team working on freeing the ship have the appetite for this truthbomb buffet? Time will tell.