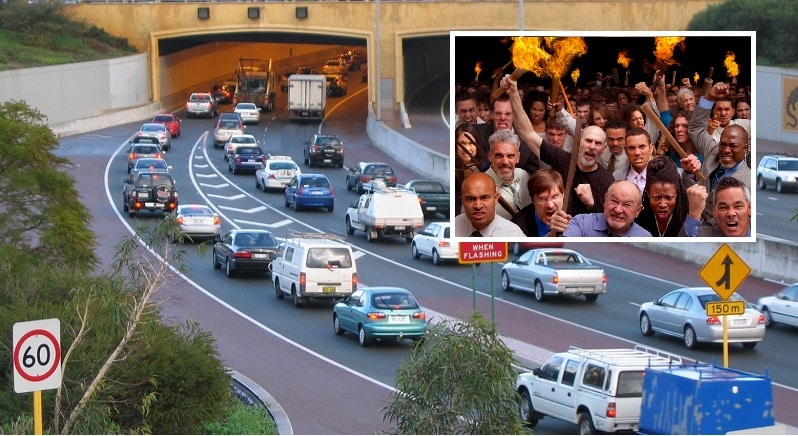 Witnesses have been left disturbed and unsettled after a brazen motorist expertly accelerated up to 80kph on the approach to the tunnel and maintained that velocity.

This sent shockwaves through the community as many believe the tunnel has a magical enchantment that forces anyone entering it to slam their brake like it was the off button on your remote when the M*A*S*H theme music came on.

A witness who had done the right thing and arbitrarily shaved 20kph off her speedometer told The Times,

“I immediately called my mother and asked if Daniel Ricardio was back in town. This was either an F1 driver or some kind of witch. It left me pretty shaken”

Another drive almost spilled the remaining Special K she was scoffing from a bowl when she witnessed the scenes,

“Who does this guy think he is? Does he think he is above Perth driving customs? Doesn’t want to do his bit to create a bottleneck clusterfuck every morning unnecessarily? I sensed evil”

WA Police and Main Roads launched an investigation into the incident and have identified the driver in question. A spokesperson for the police told The Times,

“We take reports of menacing supernatural beings on our roads very seriously. We’ve decided to throw him into a merging situation after the Charles St onramp and if he merges correctly he’s a witch and will be dealt with”

We spoke to the driver who was currently being held down in Perth with an angry mob of tiki torch-wielders chanting for justice. He told The Times,

“Obviously the community is a little shook at what they witnessed. I can see why they think I’m a mythical being that transcends the laws of Perth nature. One bloke said he wanted to lob off my foot to make a driving potion so he stops farken up his insurance premiums”