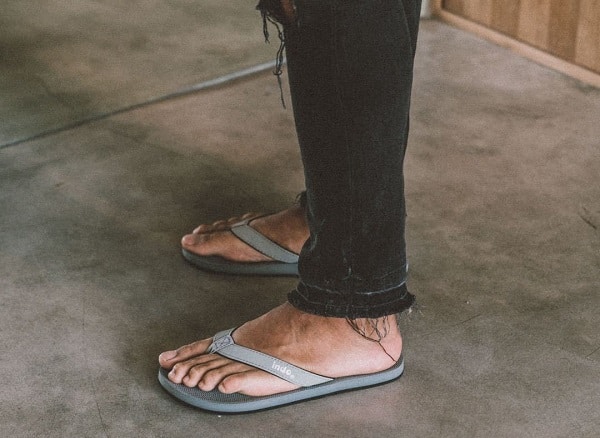 One would find it hard to name a look that screams, “I was forced to wear pants but I’m staying true to myself” more than jeans & pluggers. Accordingly, it has been a mainstay on the fashion runways of Rockingham to Joondalup for years in Perth.

See, many Perth residents find enclosed footwear to be a encroachment on their feet’s rights. If we’re being honest they feel the same way about full-length pants but now and then the temperature dips low enough to test even the most staunch short aficionado.

One could suggest an ensemble of shorts & enclosed footwear may be better for warmth but such a claim would get you shouted down by any cob in a front bar worth his salt – and he’d be right.

We spoke to Todd who has been rocking the jeans & pluggers look for over 30 years. He told us,

“some fashion comes and goes mate, when I first start rocking the look I had bleached tips and a shell necklace. I was a bit of a surfrat, to be honest. A lot has changed since then except the pluggers & jeans and the white sunnies. Some things transcend cyclical fashion trends, mate”

Tania shared the view recounting a time she intimidated a couple of “dogcarrrnt” waiters at a high-end eatery to let her and her hubby in for their anniversary meal, she told us,

“It says right there on their dress code, SMART CASUAL, where we come from there isn’t a better example of smart casual than the ol’ O’Neill jeans with our good pair of going out Havis. Well, my Jimbo wore his Surfer Joes but that’s why I love him, he’s a bit fancy”

Indeed the look is particularly popular in Spring. A month that famously lets every Perfite down. We managed to catch up with Corey who had just completed 12 years at Hotel-Hakea for slinging the good stuff.

“I left the joint wearing the same shit I went in wearing – an Ecko shirt, frayed Rusty jeans, and my favourite pair of Big W double pluggers. That Mago who put me away said I didn’t show respect to the court but I had the last laugh, as the look is bigger than ever, I feel like I’m in Milan. Also, me bitcoin wallet is worth shitloads, is website still running?”

We regretfully told Corey that the BTC community has tried to distance itself from its past but assured him that, unlike crypto bros, the jeans & pluggers look is still true to its roots.

We think that comforted Corey somewhat. As he went out in his spring best to try and on-sell some leftover merchandise that the po po never found the old-fashioned way – in Northbridge at 2 am.

“You think anyone would think a bloke in jeans & pluggers would rip em off?” Corey mused as he got on with his life.