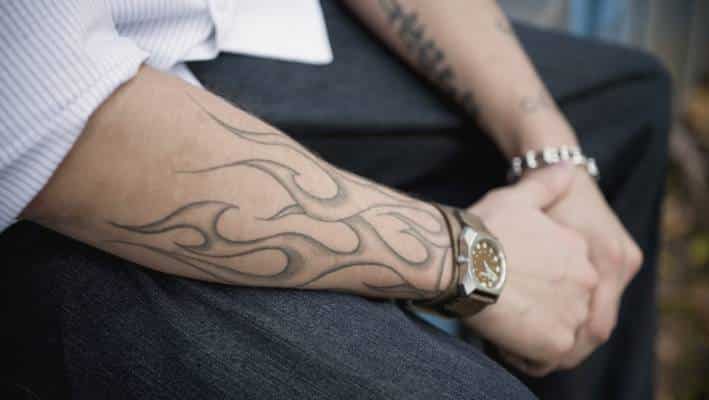 Dielyr was absolutely positive he was never going to regret getting “RYBEKKAH” tattoo’d prominently on the side of his neck. After all, she was his ride or die and they had shared a whirlwind 2 months together before the ink. A personal best for Dielyr.

Alas, cupid’s arrow has a funny way of missing and Dielyr knew she wasn’t the one after she gave him an ultimatum – “the backyard Harley burnouts or me”.

If there’s one thing about Dielyr it’s that he doesn’t take kindly to ultimatums. He told The Bell Tower Times,

“Did I tell her she couldn’t watch The Chase every arvo while I was trying to sleep off a hangover? No. Relos are about compromise mate and she was just take, take, take. Plus the boys love coming round to rip up the backyard ay ha ha, yeah nah she was no good”

So that was that. Alas, Dielyr’s neck tattoo was a painful reminder of yet another “authority figure” that tried to change him.

He was tossing up getting the tattoo’d removed until fate intervened after he (once again) failed to execute a basic pull out in the bathroom of the Swinging Pig. 9 months later he was a father (again).

He told The Bell Tower Times about the life changing experience,

“Seeing that little baldy pop up changed me life, mate. It all became clear, just call the little lady Rybekkah and I’ll save a coupla hundo on the removal. One of those reaaal beautiful moments ya know?”

Asked if the mother was receptive towards the name, he told us,

“Nah, not really bro, the original Rybekkah was actually her sister, ay. She reckons it’s toxic or someshit but I reckon it’s poetic in a way. With the money saved I can get some pink tyres for the burnout reveal. Funny how the universe talks to yas, ay. This neck tattoo problem started with burnouts and now it’ll end with one”

Truly, the circle(work) of life.