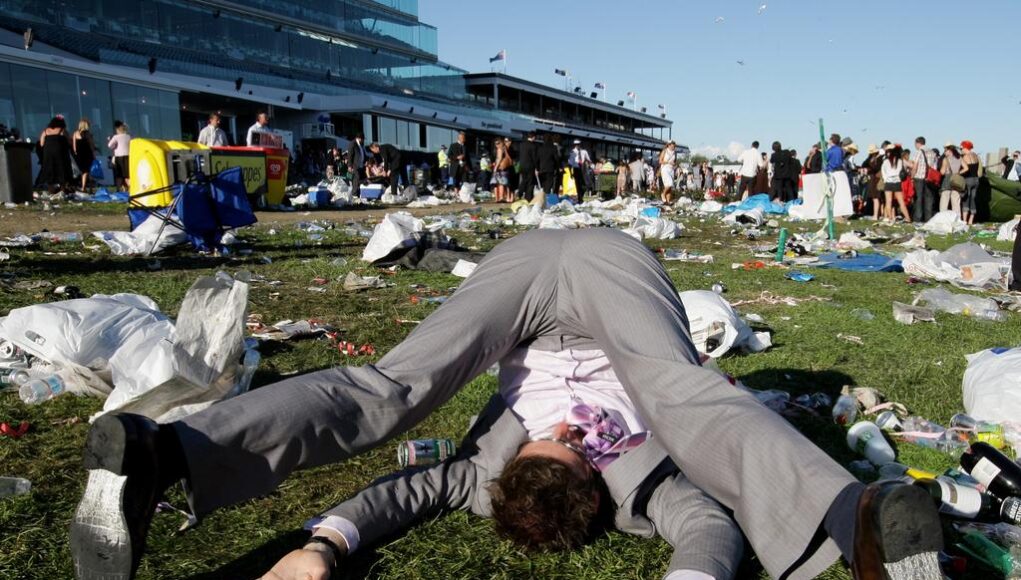 Despite peppering his non-private social media with pissed up race day photos, Tim still reckons he can pull off the perfect ruse tomorrow by telling his employer that he’s come down with a nasty case of the shits.

That isn’t entirely false, as his brand spankin’ pair of Alpha jocks can attest to when the rollercoaster of his liquid intake came off the rails moments before getting his pants down and locking his cheeks on the public toilet.

In total, Tim was featured in roughly 500 photos across a range of social groups. Including the vulture media waiting around to take photos of drunk kents for the easiest clicks of their life.

“Yeahhhh bruzzzzz WOOOOOOOOOOOOOOOO, fark yeah, up 200 and still got half a bag, YEWWWW, I’m off chops lads, oi you don’t reckon anyone will see the pics from those chan 7 farks will they?”

Unprepared to ruin Tim’s buzz we asked what his plan was,

We didn’t think it would hold up but again. Why ruin the man’s buzz. He was up 200 and almost certainly was going to wake up in an existential pool of primordial anxiety.

We spoke to his office manager who had been watching his Snapchat, Instagram and even Facebook story all day,

“He does this every year, he’s not the stickiest dead horse in the glue factory let’s put it that way. To be honest, I’d expect him to call in sick tomorrow because if he comes in he’ll probably pass out and shit all over the toilet floor again”

Tim is expected to receive his two weeks notice tomorrow.