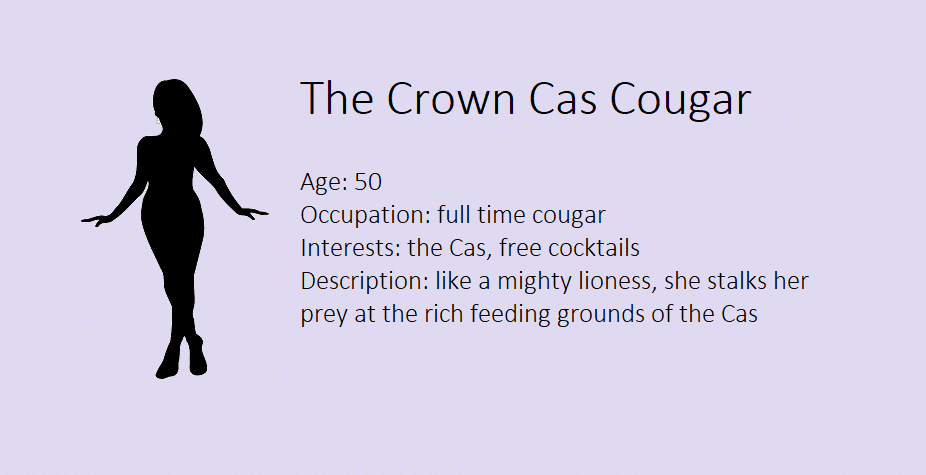 Alyssa has destroyed more husbands than the Ashley Madison leak. Each court order added to her spoils of matrimonial war. Now with time and resources, she can dedicate herself to her true passion – full-time casino cougarism.

She was living the middle-class divorcee dream – a 3 series BMW, a duplex in Rivervale, and part ownership in a beauty salon that almost purely exists to doll her up for her for big weekends at Crown.

Friday night is a big night on the cougar calendar. She knows there will be plenty of cashed-up bogans winning a few bucks on the tables and it represents an excellent opportunity for her to slam down some cocktails for free. That late-middle-aged alcoholism isn’t cheap, ya know?

She arrives at Crown to be met by her gaggle of friends. Mature-aged women with fake tans and lips that look like a case study in a proctology exam. Their eclectic selection of cocktail dress colours has them looking like a packet of toey skittles as they eyefuck young studs to come and taste the rainbow.

It’s still early, so no one has rouletted-up the courage to approach Alyssa’s intimidating flock. It’s over to plan B – crudely flirt with a male bartender in the hope he’ll add an extra shot into her Vodka, Lime & Soda.

She attempts a similar tactic with a bar manager. Telling him it’s her friend Shar’s birthday and how a bottle of bubbly on the house would be a sufficient gesture. When that fails, she starts name-dropping like a reality TV star after they attended a minor award ceremony.

It’s a desperate scene that luckily is saved by a nearby plumber who remembers doing a little work on Alyssa’s pipes a few weeks back. He charges over with a generous heart, a wad of cash, and nostrils filled with more ice than a large coke from Macca’s.

They’d found their cash cow for the evening. The only proviso was they would have to watch him gamble for 3 hours straight. Luckily he kept them entertained with endless stories about how much money he had. Music to their ears.

He was young, rich, strong, and only had a mild casual drug dependency. So, like a knock-off Chanel bagged praying mantis, Alyssa entices him with an offer of more head than he could ever bargain for.

It was simple, she avoids paying for an Uber home tonight, they crash in a (nice) Crown room at his full expense and she’ll have a chance to take more photos showing the “high life” she allegedly lives. It’s a win-win for everyone.

If only things could be that easy of course. It isn’t long until the outer-suburban girl from within boils to the surface after a bouncer tells her to take it easy while she’s flailing around on the d-floor like a distressed sea bird caught in a 6pack holder of inebriation.

All she has to do is politely acknowledge the request. Deescalate her party-bus-panache and then it’s a free ride to Crown Towers’ gazillion thread count cotton sheets. Nup, she can’t do it.

Like a don’t-you-know-who-I-am-volcano, she erupts and spews out a slur-y love letter to her own self-importance. Sadly, the bouncer takes a contrary view and sends Alyssa on her walk of eviction shame.

She gestures for her plumber-boy to come running. Alas, he’s just hit it big on red and has decided to just take a coupla couplas from the classifieds back to the room he booked.

Alyssa is forced to concede defeat and spends the remainder of her night creating alt FB accounts to leave scathing reviews on the plumber’s page. She doesn’t bother doing the same to Crown, as she’ll be seeing them again tomorrow night.

Try to stop her.