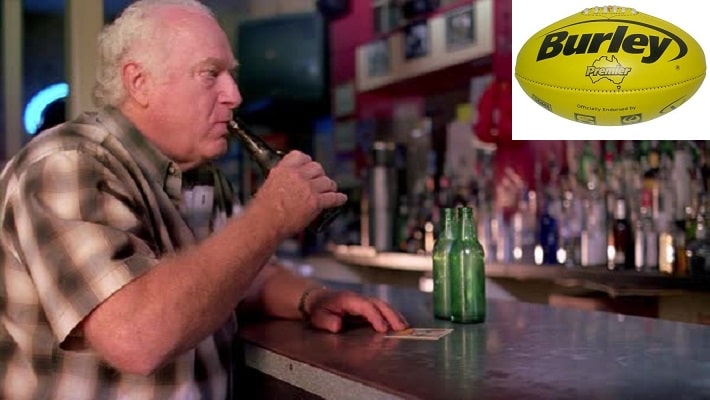 Ask any bar tender from Derby to Esperance and they’ll tell ya that old mate, Kenny, maintains he would’ve been an AFL star if only they used a “proper” footy and not cheap, Victorian trashballs aka Sherrins.

One thing to know about Kenny is that he’s firecly patriotic of the swan state. In fact, in protest at missing out on several AFL drafts he has never left WA. “Why would I? You can keep ya Sherrins and your Mardi Gras, I’m roight just here, cob”, he angrily barks while nursing his 6th stubby of Emu Bitter.

Without any prompting, Kenny hops off his bar stool unsteadily and demonstrates the technique he used to “torp a Burley 75m off one step”. It was such a raw act of physical prowess that there was even a bit of follow through.

Trying to ignore the growing stink, he asked Kenny why the AFL’s use of Sherrins hindered his career,

“Look here, sonny, I had Geelong, South Melbourne and Footscray all begging me to try out but I told them straight out, I’ll only lead them to premiership glory if they use a proper ball, it’s about using the RIGHT ball! Not the WRONG ball”

What followed was several minutes of incoherent old mate babble about a footy needing to be “rounder and softer” and that we should name one “VFL” player that ever kicked 20 straight in the first quarter, like he (allegedly) did in the WAFL.

Turns out this wasn’t rhetorical and Kenny grew increasingly agitated with each repeated request to “name one”. It wasn’t a statistic anyone in the bar had on hand.

An awkward silence followed with Kenny grunting and playing with the shrapnal in front of him. After several more sips of his stubby he launched into a somewhat related tirade.

“Problem with the game now is the modern full forward! Running round and snapping goals it’s a disgrace! The proper way to play footy is drop punts. I could drop punt a Burley threw the big sticks from any angle, every time. Not like these dancing po…”

At that second, the bar tender shots him a look, “what did we say about using that word Ken”. Slightly bemused, “can’t even call a spade a spade anymore but we all know what men who snap around the corner are mate”

It was becoming clear that perhaps Kenny’s problem with the AFL wasn’t just the use of Sherrins. However it was a hurt lock we didn’t want to open, espeically as he ordered his 7th Emu. No doubt, the point of no return for Kenny.

Perth Man’s ‘14 Photo Of In-N-Out Burger *In L.A* Going To Get An Absolute Rinsing Today

Karratha Couple Call Off Wedding After Critical Thong Blow Out

An attendee at Perth Van Gogh Alive exhibit has gone to great lengths to separate herself from the plebs by treating her surrounds to...

Karratha Couple Call Off Wedding After Critical Thong Blow Out

Crypto Bro Flexes On Crypto Community By Posing Next To 05...