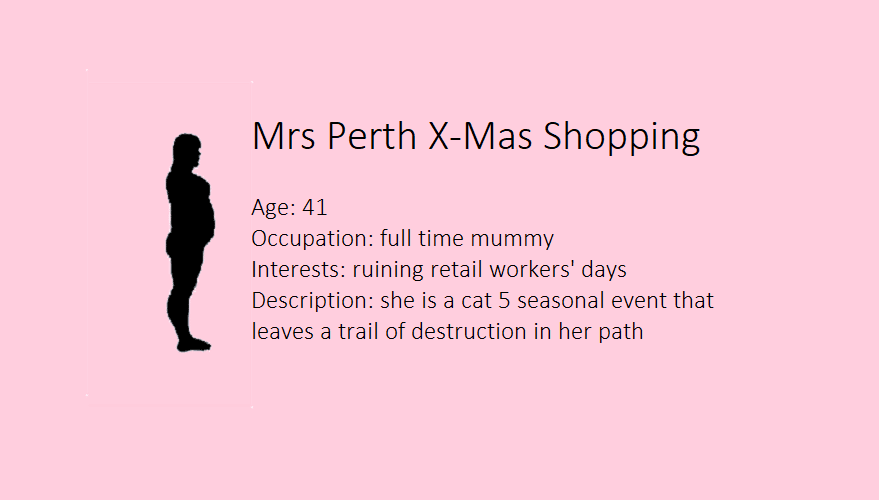 Trish has turned more people into online shoppers than the Rona. Why? Because sharing a multi-retail facility with her is about as pleasant as being a toothpick at a smegma fondue party.

To satisfy her relentless hunger for face-to-face consumerism, she ruins her family’s day by loading everyone into the Rav 4 and hitting up Karrinyup Shopping Centre for a day of shopping.

Predictably, free parks at the centre are harder to find than a cougar still wearing her underwear after a Chris Isaak concert. Desperate times call for desperate measures so to double her odds of getting a park she sends the hubby Sam out into the field for some recon.

His mandate is simple, to spot and then camp in the spot until she can get the car there. Thanks to the nature of the Karrinyup labyrinth, Sam is stuck fending off pissed-off motorists for 20minutes as he closes his eyes and tries to go to his happy place.

Sure, the abuse he is copping is destroying his self-esteem but it’s nothing on what Trish will do to him if he loses the free spot. Finally, Trish arrives and slots into the park. Sam pleads with her to hurry as he’s concerned the Landcruiser driver from 15 minutes ago will come good on his promise to ram his decorative MaxTrax up Sam’s kwon if he sees him again.

Trish loads her 48 month year old into an oversized pram and diagonally drifts through the shopping centre corridors while glued to her phone looking for deals. Anyone who dares to register their frustration at her actions is met with a stink eye that could de-sex a rabbit.

After warming up on a checkout attendant at Big W she’s ready to really ruin a seasonal shopping centre employee’s day at T2. According to Trish, it’s the 17 year old’s fault that T2 ran out of the exact flavour of tea she wanted to buy as a gift to herself.

Yes, the lady who drinks 3L of Diet Coke a day, is somehow fussy with the liquids that go into her loudmouth. She eventually leaves the store ranting about how many T2 products she buys each year and how it’s no way to treat such a valued customer.

She’s firing on all cylinders now and makes light work of the 10 other store attendants that are unlucky enough to cross paths with her that day. Sure that Myer employee didn’t honour a sale offer Trish received in 2019 via email but at least they have a little bit of anxiety about the complaint coming their way. To Trish, that’s a big win.

Trish is now angrily stomping through the store like some kind of mumma cassowary that would destroy its own eggs. She’s in the exact right mood to create some beautiful memories with Santa.

Trish fails to convince the Santa photo staff that she has a “medical condition” that means she can’t line up for long periods of time. Needless to say, Trish doesn’t take the rejection well.

After loudly going off like a Bunbury banshee after honking on a few light bulbs, she is somehow shocked to find her 48-month-old is distressed. Naturally, the pampered child erupts into tears for the photo and is unable to calm down. Despite Trish’s soothing screeches at Santa for making her baby cry.

Finally, all the family has left to do is battle through the car park for about 2 hours while they hear about every moment Trish felt aggrieved by retail staff in excruciating detail. These are the good times.