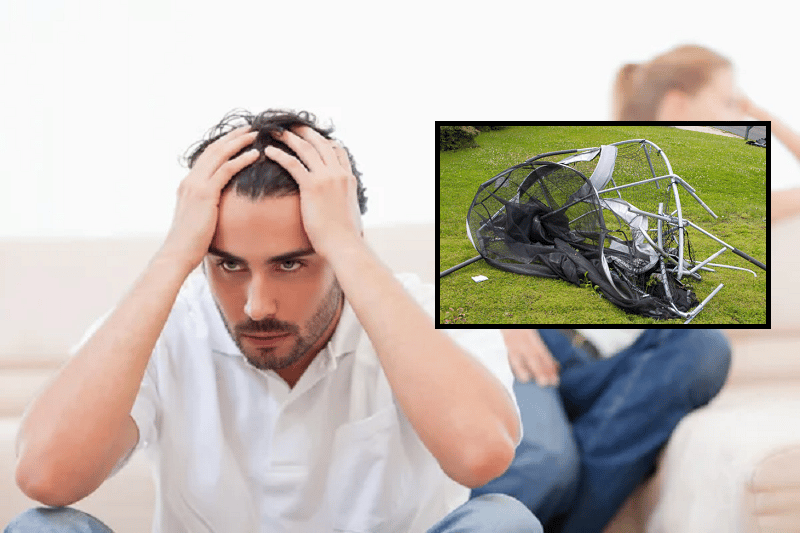 After 4 years of marriage, Brett & Simone thought their marriage could handle one of life’s ultimate tests – trying to assemble a trampoline on a 43 degree day.

It seems the couple had been lulled into a false sense of security after managing to pass through 3 levels of intermediate Ikea flatpack hell last july. Looking back, those were the good times.

“Cracks really started to form about 5 minutes into the job. Neither of us had ever done it before and it soon became clear this wasn’t the simple assembly job BRETT had assured me it was at A-Mart”

A neighbour who watched on from their second floor balcony reported the couple spending a good hour looking at the parts blankly and starting the job with no discernable plan of attack. They told us,

“I went down after about 30 minutes and told them that when we did this a few years ago we just got someone off Gumtree to come and do it. It wasn’t worth it. I think that fanned the flames to be honest because it sure didn’t settle them down”

By the 2 hour mark, the couple appeared to be further behind than when they started. Brett had nearly broken his toe kicking some random piece of metal shit and Simone was telling him in no uncertain terms that she wished she’d married his best friend instead.

By the 3 hour mark, the couple realised that guests were arriving in just under an hour and the trampoline was looking more like Perth Arena than an exciting toy for the children to bounce around on.

The atmosphere between the couple was icy during the lunch as the mangled trampoline sat in full view of the guests. Leading Brett to triple his alcohol intake while Simone quadrupled her emasculating comments towards him.

Their marriage was dealt a 4 punch combo right to the ribs when Brett’s handy cousin arrived and like a X-Mas day adonis got the trampoline up and ready within an hour. Barely breaking a sweat.

Always a class act, Brett decided to sulk in his shed for about an hour before coming up twice as drunk and tell the table that if you wan’t to know how “handy” his cousin is, ask him about what he did with his secretary at his work X-Mas party and why he’s sleeping on the couch this holiday.

Maybe this doesn’t sound normal but high on trampoline rage it is.