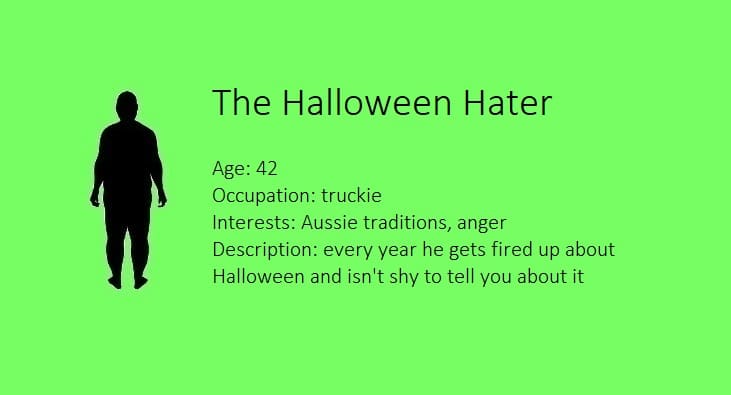 For Brett, getting slightly more drunk than usual on certain days of the year is all the tradition Australia needs. Every Halloween his mood is shittier than Oscar after his trash can was moved to a dog park.

Over breakfast, Brett’s wife tells him they have to go shopping. As it turns out, their niece is taking some of the neighbourhood kid’s trick or treating and they need some supplies. Needless to say, Brett goes off like Basil Zempilas on a 1999 Connection’s dancefloor.

“We are not celebrating that AMERICAN SHIT. Bloody hell, luv, Halloween is not Australian and it can fark right off” She retorts, “oh don’t be silly Mr grumpy, all the young ones look so cute in their little outfits, it’s a Celtic thing anyway, come on let’s go”.

At the shops, he sees a young couple deliberating over a which pumpkin to pick for carving. His keys rattle violently in his cargo shorts as he speed waddles over, “Pumpkin carving and bloody Halloween is NOT an Aussie tradition!!!”

His wife cautions him about his blood pressure. As it turns out, eating so disgustingly that he needs weight control medication is a tradition he was more than happy to pick up from ‘Murica.

While driving his American Ford and fistfuckin’ a bag of American Doritos, Brett spots a couple of kids in spooky outfits walking down the road. He winds his window down and deals with the situation like any calm, rational adult would, “FARK OFF!!!”

Back at home, Brett begins to scroll through his beloved American Facebook and notices Aussie brands doing Halloween promotions. His rage is now festering like a fungal rash in the underpants of anger mismanagement.

After firing off a very angry comment under the promotion, he walks into the kitchen to see a bowl of Cadbury Favourites and spooky-themed lollipops. In an act of unspeakable villainy, he takes the bowl into his den and hoovers the lot like he was Clive Palmer with a golden ticket.

His wife goes apeshit at him and returns to the store to buy more. At this stage, Brett is blaming Halloween for putting his marriage at risk. So he gets to work on a sign he intends to stick to his door tonight. He poetically scribed, “WE DONT CELIBRATE HALLOWEEN… DONT KNOCK OR ILL BELT THE PISS OUT OF U LITTLE KENTS”

His wife returns home and rips the sign down, “calm down Brett or you’ll bloody be sleeping on the couch again!” Brett again directs his rage at Halloween ruining his marriage and sulks on his chair. That’s until he’s disturbed by the faint squeal of kids.

Inspired by his own descent into madness, he races to the corner of the house and turns on his sprinklers. Soaking a group of 10-year-olds to the bone. It’s the first time he’s truly felt alive all day. He then happily sets up the couch for his sleep of shame. Worth it, he reckons.

Before bed, Brett begins to flick through Facebook bored out of his mind. He comes across a few photos of his niece and her salaciously dressed friends. His eyes dilate. This isn’t how they all looked at her 18th last year.

There is motion in the ocean as he begins to “enjoy” Halloween a little too much. After his solo throes of passion, he stews in his soiled sheets and a calm comes over him. He’s finally found something to celebrate each year.