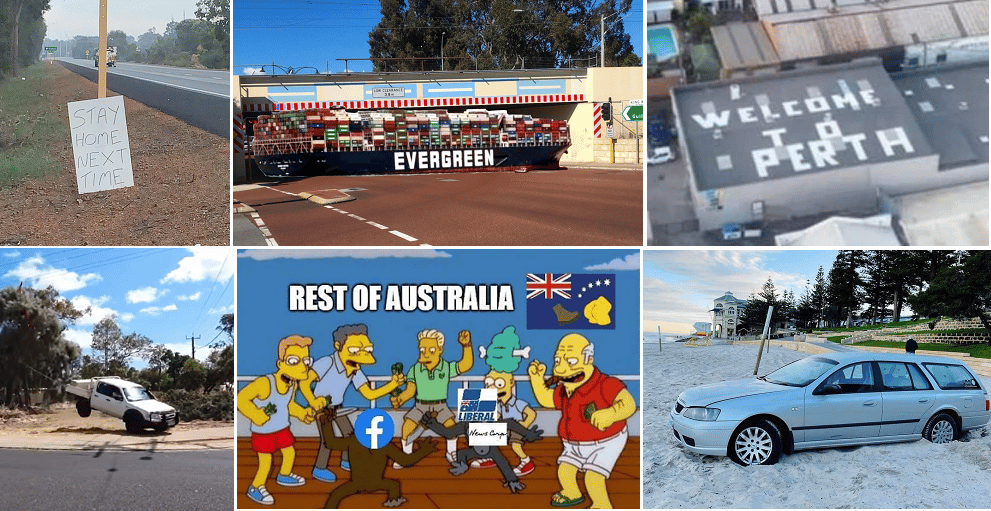 The summer of river bull sharks – January. After a tragic bull shark attack at Black Wall Reach, Perth blowhards hit new levels of blithering bullshittery. Let’s just say, if the commenters on FB were little wooden boys, their noses would have penetrated Geppetto from downstairs.

Suddenly, everyone fended off a 5-6m bull shark without spilling a drop of their beer. Others thought a more permanent solution to the extremely rare bull shark attack in the Swan was required.

Facebook flexes on Australian news outlets – February. Who could forget the blissful week when a weird harmony fell over FB when Zucc took down all media FB pages and banned sharing of their articles.

We got a well needed break from the clickbait garbage being shitposted and people embraced the true meaning of FB – naming & shaming suspicious looking children in neighbourhood groups. It was a beautiful time to be alive.

READ MORE: HEADLINES WE ALL MISSED DURING THE NEWS BLACKOUT

The Suez Canal Experts Cometh – March. A fair bit happened in March – Nedlands turned Labor and the Libs ended up with less seats than a standard sedan in an election spanking that took no notice of any safe word. However, the true gold came when a big arse ship got itself stuck in the Suez Canal.

Naturally, everyone from Susan in Baldivis to Ken in Two Rocks had an expert opinion on how to free the ship and ensure global trade could recommence. So many experts being ignored by the authorities!

READ MORE: IN FOCUS: Unblocking the Suez Canal – a panel of armchair experts

StarTrack is 2 fast and 2 furious – March. Good to see StarTrack getting a move on tbh. Spotted in Bibra Lake.

Douth wants to secede from Perth – April. If one casts their mind back to April, they will remember that on the eve of the Easter long weekend Perth was put into lockdown and those that managed to escape Douth just in time were met with hostility by the locals.

The announcement was about as last minute as it comes. You could just imagine some bloke with his foot hovering over the accelerator in his LandCruiser losing his god damn mind waiting for Marko’s press conference as it keeps getting pushed back

READ MORE: THE DOWN SOUTH BOGAN

Cott gets a taste of SOR & the great Hami Hill KFC bucket appears – May. One could only imagine the shock on a Cottesloe resident’s face when they woke up to find a Ford Station Wagon sitting majestically on their beloved beach. Some pisswreck had gone on a burnout joy ride through the hood before being arrested on the beach. Sculptures by the Sea eat your heart out.

It’s undeinably very on brand for Hami Hill. For a brief moment in May people wanted to believe that this was the height of cracktivities. A rogue Hami Hill resident deciding to compensate himself for all the money he’s blown on Zinger Boxes over the years. In reality, it was all above board but as far as I can tell the bucket still sits out the front of the house. How icons are born.

Perth gets the respect it deserves in Shitney – June. Perf’s Banksy went interstate. No one was particularly sure on why they did this. It’s hard to imagine someone flying into Sydney and actually believing the plane had been diverted 4 hours to sunny Perth but Banksy works in mysterious ways.

That takes us up to July. Stay tuned for PART 2 soon…