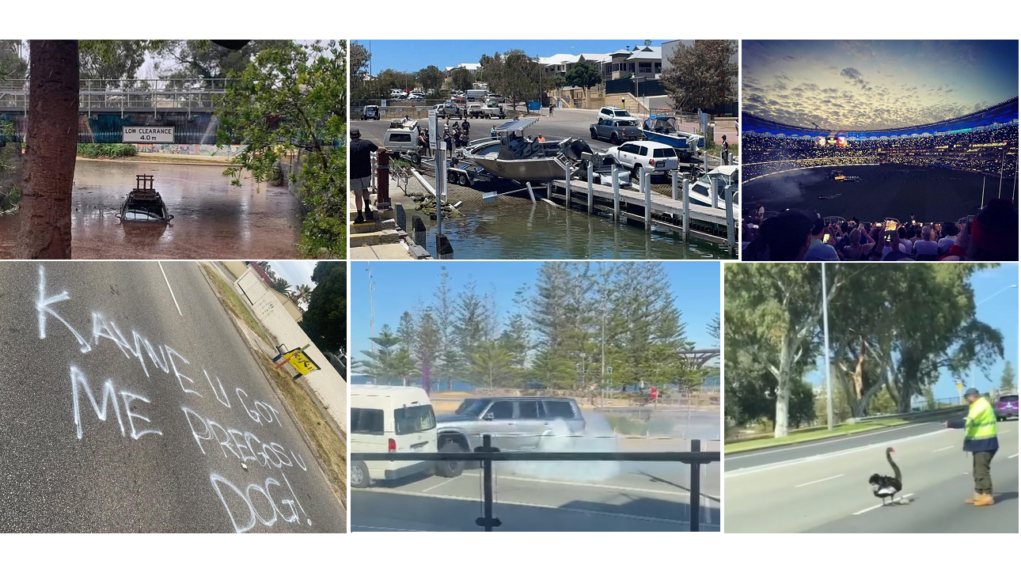 Floodageddon – July. Mother nature decided to pop a squat and piss like a race horse on its 7th pint. Rudely exposing our city’s abysmal drainage situation.

Many a misadventurous punter drove their noble mechanical steed straight into the wet pit of insurance write offs while every weekend warrior with a snorkel on their 4WD got to feel like a real outdoorsman for a change. Wild.

READ MORE: Taxpayers: why spend millions on a WACA pool when we can neglect road drainage for free?

On the bright side, we finally got to live out our dreams of a Bali style Bunnings Snag Swim Up Bar.

Naturally, Scaborough made lemonade out of the situation…

Albany rental crisis gets out of control – July. If you thought the rental situation in Perth was bad just have a look at what was on offer in Albany. Can’t beat the view though to be honest.

We almost reached peak Scabs – August. It almost feels wrong to try to put words to this magical Scabs moment. It has all the elements of some classic Scabs carry on – souped up Patrol, gun fire and hectic burnout during the day. Sublime.

Mumma Swan DGAF about your commute – August. As far as she’s concerned, we went and built a Freeway over her hood and she isn’t inclined to compromise. Good hustle by the toey. Risking a savage beaking.

Perf gets the Grand Final – September. The only thing better than hosting the grand final was imagining the sound of Eddie’s blue vein popping after hate-wanking to the news he wasn’t given an exemption to come over for it.

In even more unbelievable scenes, Perth managed to hold its shit together and put on a hell of a show. Perth Stadium shining as per usual.

READ MORE: AFL Confirm 2021 WILL Be the First Grand Final to be Played in a Cave

READ MORE: Eddie to Miss 3 Weeks with Debilitating Bruised Ego After Being Denied Entry to WA

Ellenbrook puts on a show – September. Ellenbrook residents were thrilled to see a “cop car” shredding tyres and driving sideways around their humble streets. It was all above board until it wasn’t. With the cops ultimately cracking the shits. What a spectacle though – Targa West Rally.

Perth loses its mind over Taco Bell opening – September. We knew this was going to happen but that didn’t help dull the shame we collectively felt seeing people form daily queues for the better part of 2 months. Sigh. Why is Perth like this?

Kalgoorlie Roadhouse takes NO chances – October. One does not simply add this many urinal lollies to the trough without having seen some serious shit. Do not judge these actions unless you have felt the poorly aimed fury of hundreds of dehydrated meat lizards being drained into your urinal.

When it comes to men like Pikey, ever take chances: Mr Kalgoorlie.

A keg tragedy – October. Some say the car stinks of beer to this day.

Curtin becomes the ice epicentre of Perth – October. It was a wild year with wild weather. This impressive hail looked other worldly.

Cleo found safe – November. Although trying to keep this review on the zesty side it would be hard not to mention the ordeal of young Cleo Smith. WA takes its hat off to all those who helped find her. No doubt The West is planning a 15 part doco-series as we speak…

Young lad knackers himself on the telly – November. Copping one to the balls is a fact of life. Few get the honour of having their special moment broadcasted live on TV though. Well done son, bruising is temporary, glory is forever.

Kayne is a dirty dawg – November. Unsurprisingly, Scabs has had multiple entries here. It’s like Perth’s narnia. You crawl through a closet and are suddenly surrounded by a bunch of freaks and creatures you’ve never seen before. Anyway, hope you sorted this out Kayne.

Chaos at Mindarie – December. This has to be one of most hectic boat mishaps ever caught on film in Perth. Amazingly, no one was hurt (save for a few bruised egos and insurance premiums). It perfectly encapsulates the spirit of yew in the Perth boating scene.

X-Mas shoppers still stuck in Karrinyup – December. It’s the perfect storm of popularity and poor design. Anyway you look at it, going shopping at Karrinyup was pretty hectic this X-Mas season. Especially if you dared brave the underground carpark.

READ MORE: Karrinyup Shoppers Assured If they Get In Now They “Should” Get Out of the Multi Level Car Park Before Christmas

Perth’s forecast stuck on FARK ALL – December. To end a tough year for many, WA & Perth decided to relocate to the centre of the sun. Recording a 43 degree X-Mas and a 44 degree boxing day. Cheers for that sun, you big ball of gascunt.