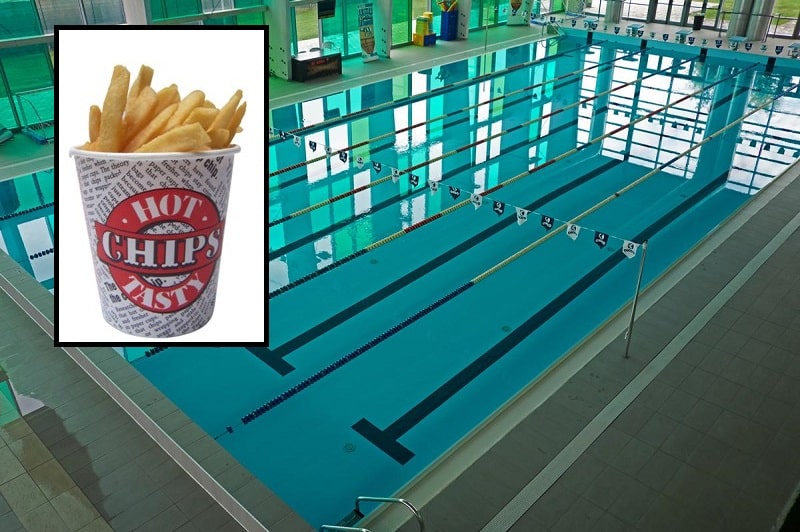 In a desperate, last-ditch attempt to get his rig ready for summer, Kyle decided to reunite himself with the lonely world of lap swimming.

It was all going well during his first session. He managed not to quit after the first lap and went on to swim a total of 150m. Not bad for a man that can’t even be bothered giving his old feller an adequate post-piss shake.

During his second lap, he even thought to himself, this is it. This is the summer I’m not sucking it in during every photo op this summer. If only it could be that simple.

See, since the moment he walked into the chlorinated kingdom he couldn’t shake the intense feeling that he could smash a bucket of hot chips. Absolutely drowning in vinegar and enough chicken salt to seize an elephant’s heart.

“Thing is, I was swimming but instead of thinking about my breathing or my strokes, I was thinking about hot chips man. It was like my inner child appeared and told me that I’d earned a cheeky bucket of chips, after all, I’d done 2 laps by that point”

Somewhere between getting out of the pool and walking to the changerooms that powerful bolt of nostalgia became too much for him. He skipped the shower as by this point he couldn’t tell the difference between chlorine and the smell of deep-fried potato saturated in clear gold.

He was stinking. Stinking good as hell. He told us,

“I just sort of drifted towards the canteen, bro. Ended up getting one of those family boxes and destroyed them on the walk to my car. Got some pretty serious heartburn, my man. I thought I was going to cream my Speedos”

After the chip-lust wore off, Kyle began to feel the shame and promised himself that was the last time he did that. He had to be disciplined.

His next session at the pool was even more tortuous than lap swimming usually is. Once again, the humid aroma and squeak of a distant echoey lifeguard’s whistle got him hankering. Hankering real bad.

Like a priest repressing his urges, he hurried out of the gym after cutting his laps short. Oh, father, he was going to sin. You can only imagine the pride he felt after managing to get to his car without indulging in another bucket of fried delight.

If only he’d washed that chlorine off him. His car stunk just like the pool and 5 minutes into the drive he veered suddenly to pull into a Chicken Treat drive-through. He was powerless to resist.

True to his word, he never gave up on swimming however he has now eaten more serves of hot chips than laps swum. The man with a plan had turned into the x-mas ham. You hate to see it.