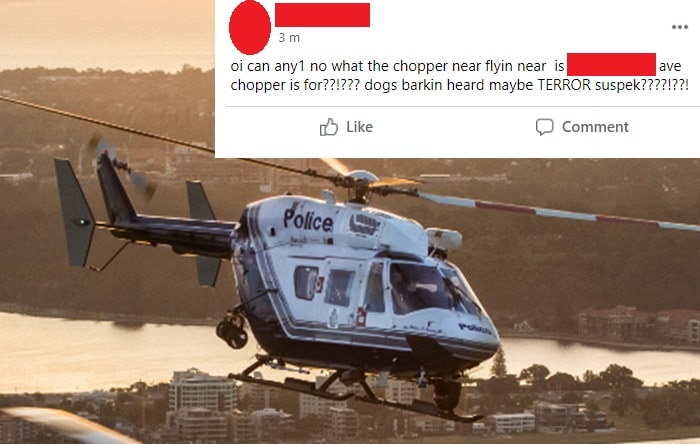 WA Police have come under attack by FB community page admins for failing to consult with them before launching emergency operations to track down scumbags or offer front-line support.

Carol, rules over a southeast suburb with an iron fist and says the police should consider the impact their operations have on her jurisdiction,

“Admin is under the pump whenever there is a chopper overhead! If they knew how much work was involved in moderating comments and ensuring my authority remained unchallenged they’d do the right thing and inform me as to the nature of each chopper, it’s disgraceful!”

“It’s about courtesy, when the police enter my 4.1km2 suburb they are entering my turf. You wouldn’t enter a man’s backyard unannounced, would you? Residents see me as more than just an admin, they see me as their leader. They look to me when their dogs are barking at a whirlybird or their dumb kids can’t sleep. I’m essentially their god”

Police admit they have been unspeakably rude. A spokesperson told The Bell Tower Times,

“The Police Air Wing was designed to provide community assistance and we have missed that mark. In our one-eyed attitude towards tracking violent offenders, missing people, and emergency support we have failed to consider the impact it has had on curious mouthbreathers in community groups”

We took the opportunity to ask the Police how they slept at night knowing that in Ellenbrook alone, there were over 84 individual queries about a chopper on a single night. He paused in obvious shame before continuing,

“It was one of the darkest days in our history. We understand the admin had to calm down the masses with a passive-aggressive post. One lady was even sadly muted for 30 days for asking ‘who cares?’ Admin cares, admin cares a lot”

Going forward, a WA FB Group will be created and all the “movers, shakers, thought leaders, and powerbrokers” from local community pages will be invited to join.

Police admit that there will be a lot of big egos in there. With some admins looking over 1000s of residents. However, the idea is to consult with these people before a chopper starts spinning its blades.

“We accept this consultation process will slow down operations. If a child isn’t found or a dangerous criminal escapes then the public will just have to accept that admins life has been made easier and that’s our main concern at this stage”