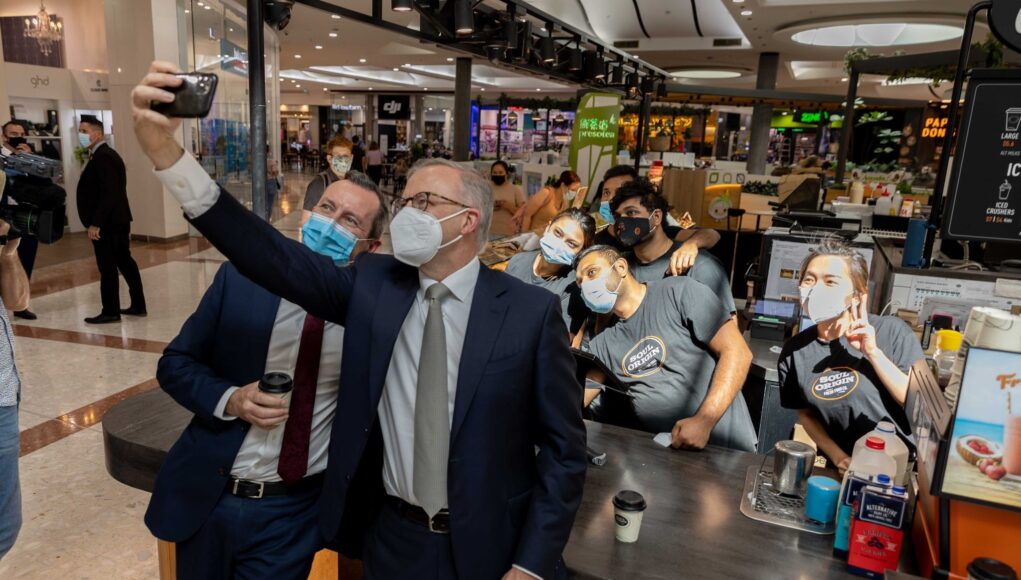 It’s that wonderful time of the triennial where Federal Pollies stop seeing WA as their piggy bank and attempt to win over our hearts and minds during a token visit for a week.

ScoMo was a pretty hard act to follow with his promises of kickflipping the Telstra Exchange, shouting some deccos, and bringing back Chooks. Let’s see what Albo is bringing to the table:

Albo points out Rotto on a clear day – while speaking to a press pack during a visit to the WA coast, the Albmeister expertly swiveled towards the water and announced, “there’s Rotto”.

It was a big dick WA move but unfortunately, his finger was pointed directly at Garden Island. Sort it out Albo!

Albo asks a struggling business owner what school he went to – damn, the Albanator did his research on this one. Knowing exactly what questions WA residents want to be asked to feel heard.

Albo followed up the inquiry with questions about whether he was a prefect, what summer sport he played, and finally asking what winter sport he played. The business owner was 61 years old.

Albo lines up at the Belmont Forum Kiosk for a lucky Powerball ticket – despite the Powerball being a measly $20M there was still a formidable line at the lucky kiosk mere hours before the draw today.

During Albo’s 3 hour wait he habitually swatted his PR team away. Angrily denying such blatant queuing was somehow a waste of time and indeed life. You could see the warm smiles on fellow queue-addicts faces.

Albo whips a few nangs before laying some skids down Zig Zag – during his trip to the hills, Albo was invited to a unique hill dweller cultural ceremony.

Traditionally, the Perth hills are the “Iowa” of Australian federal polling, and showing the citizens he understood the philosophy of getting loose on Zig Zag was a powerful play, according to political analysts.

Albo smashes a 6 am Bush Chook at the pub in Kalgoorlie – given the importance of mining to the Australian economy, Albo decided to show WA he was up for a real miner’s experience.

It was touch and go when Albo walked in with brand-spankin’, clean work boots but soon won over the session by giving unsolicited crypto tips and talking about which bouncers in town he could make piss.

Albo tailgates a hatchback on The Tonkin – after visiting Carousel the other day, Albo decided to take his PR efforts on the road and deploy some classic Perf driving to endear himself to the public.

He waited for someone to have the audacity to merge into the spot in front of him (despite his aggro attempts to block said merge) and spent the remainder of the journey riding their arse and swerving menacingly in a Ranger.

Albo adds a P-Plate to the Ennis Ave sign in Rocko – taking some inspiration from Perf’s own Banksy, Albo brought the house down by getting two of his aides to boost him up while he stuck a P-Plate before the word Ennis.

This comes off the back of defacing the Cockburn sign by turning the “n” into a “m”. It’s estimated he won over 10,000 votes with this move alone.

Albo refrains from braking immediately after entering the Graham Farmer Tunnel – damn, the Albotross flexing hard with this one. Unfortunately, this little political stunt backfired on the man with witnesses asking whether he thought he was better than the rest of us?

Albo was forced to eat a humble-shitpie after conceding he flew too close to the sun. Time will tell whether this act of hubris will be his undoing.

Albo gets distracted trying to pronounce the Mandjoogoordap Drive sign – on a trip Douth, Albo showed WA he could be just as useless as them by butchering multiple attempts at pronouncing the frankly non-very-difficult to pronounce word.

In the process, he slowed down to a glacial 75kph in true WA form. It was a desperate attempt to relate to WA if there ever was one.

Albo refuses to catch the train – in a move that might just win it for Labor, Albo has sensationally rejected a chance for a photo-op on public transport. Telling reporters, “I’ll walk from Bassendean to Freo before I catch public transport in Perth”.

He cited his reasons as – “cbf’d”, “I’d have to drive to the traino anyway” and “if I hear some little scrote pumping hip hop from his phone I’ll kick off”. Nice.

Lauren’s relationship had three basic stages: the 2-week fun bit, the 2 year restructure of her man as a human and an intense 6...

ScoMo Hoping For Spot In Eagles Defence Should He Be Out...