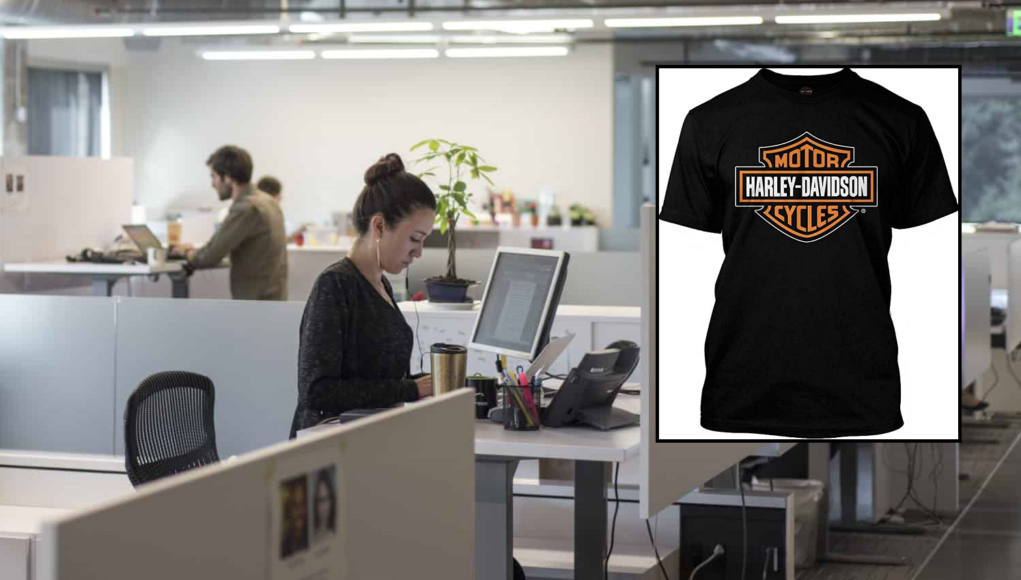 A Perth office is still in pieces after a weapon of mass coolstruction detonated in the lobby this morning. What caused this blast of swag to rip through the hearts & wiles of the staff? Tony’s new Harley Davidson shirt, of course.

No one was expecting such a bold mid-life crisis powermove but that’s the thing about Tony, he surprises you. We spoke to the receptionist Tamara who was the first to cop a massive load of Tony’s new look. She told The Times,

“He walked in with a jacket on and then tried to act like it was a bit warm so he had to take off his jacket. That’s when I saw it. A brand-spankin’ Harley Davidson tee. Wow, just wow”

Too dazzled by the shirt, Tamara failed to notice the second shock wave coming the office’s way – the Harley Davidson belt buckle holding up his semi-fitted jeans with a slight ankle roll-up. Damn, Tony, you crazy for this one.

It didn’t take long until everyone in the office was ducking for cover. He was hard to ignore especially given the extra 10 spritzes of Paco Rabanne 1 Million he picked up from Chemist Warehouse before coming in. We spoke to a young buck named Taylor who knew this outfit was a direct challenge,

“I think this is in retaliation to last casual Friday where I wore a band’s shirt. I was dragged over the coals by HR for it. Turns out I can only express myself in accordance with the corporate dress policy. Tony was pushing the envelope but that’s what dangerous fashion is all about”

Some speculate that Tony’s decision to double barrel blast everyone with his midlife crisis was due in part to several new work-experience girls starting this week. Rebecca, a seasoned admin lady told The Times,

“I asked him if that was a new shirt. He played it off like he’d had it for ages. I could see the tag still on the back. He’s such a dick. Usually, you never see him on Friday, he’s just locked in his office until 12 at which point he goes and gets pissed but you couldn’t get rid of him this morning!”

Indeed, Tony was far more ‘hands on’ than usual, taking time to mentor the new girls in the office. Members of the public are advised to watch out for Tony around the CBD but this fashion show will be coming at ya in a few hours.